The Legacy of RBG 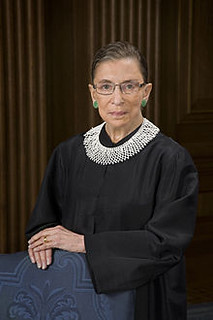 Ruth Bader Ginsburg was an extremely influential individual, whose legacy would be imprinted upon the hearts of many. She was the second daughter of Nathan and Cecelia Bader. Her mother was a major influence on her growth by enlightening her on the value of independence and a good education. She grew up in a low-income family in Brooklyn, New York. Ginsburg’s mother, Cecelia worked in a garment factory to help pay for her brother’s college education, despite not going to college herself. This act of selflessness would leave a lasting impact on Ginsburg’s future. She went to James Madison High School in Brooklyn, then eventually Cornell University.

Ginsburg was inspired to enter law when she witnessed the changes made in Sweden, where women were 20 to 25 percent of all law students. Additionally, one of the judges she observed was eight months pregnant and still working. In 1954, Ginsburg graduated from Cornell University, finishing first in her class. As a law student, she encountered sexist behavior, especially since this was a male dominated field of work. Despite this, she pressed on and excelled academically, eventually becoming the first female member of the prestigious legal journal, the Harvard Law. That same year she married a fellow college student, Martin D. Ginsburg.

RBG was appointed to the Court of Appeals for the District of Columbia, a step below Supreme Court, in 1980 by President Carter. After thirteen years of service she was appointed to the Supreme Court by President Clinton in 1993. Every potential justice has to go through a vetting process, called the Senate Judiciary Committee Hearings. RBG’s was one of the tamest hearings ever. There were very few issues that the Senate felt they had to ask her about. However, there were some frustrations about her evasive answers to hypothetical questions, as well as questions about her ability to transfer from being an activist to a justice. Being a Supreme Court Justice involves interpreting the Constitution, and keeping personal opinions out of decisions. Many questioned her ability to do this, but she was passed in the Senate easily with a vote of 96-3.

During her time on the Supreme Court, RBG was a champion for gender equality, workers’ rights, and the separation of church and state. She ruled on many landmark cases that will forever be her legacy. Very early in her time on the Supreme Court she wrote the Supreme Court’s decision on United States Versus Virginia. This case ruled that the Virginia Military could no longer prevent women from enlisting. She fought for many women’s rights, such as the right for women to sign a mortgage without their husband. RBG continuously worked to dissemble pregnancy discrimination in the workplace, as women would get fired for simply having a child. More recently in 2015 she passed two historical rulings. She was one of the six justices to rule for Obamacare in the case King V. Burwell. This allowed the federal government to continue providing subsidies regardless of what state the citizen lived in, which further cemented Obamacare. Her ruling on Obergefell V. Hodges was a testament to her belief in separation of church and state. Obergefell V. Hodges was the case that made same sex marriage legal. To think, that was only five years ago! Ruth Bader Ginsburg was a woman ahead of her time, and it is devastating to lose a person of such prestige on the Supreme Court. Many of us now get to enjoy the rights that she fought for, which is something to be eternally grateful for.