What you may not have learned: How Manifest Destiny is a Racist Concept 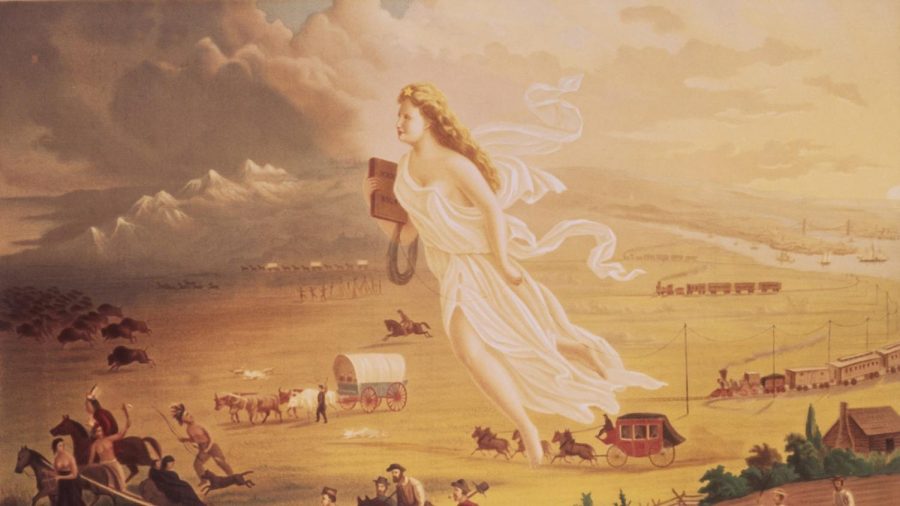 The concept of Manifest Destiny is the belief that the United States is divinely ordained by god to expand and conquer lands from “sea to shining sea.” From the beginning of the 19th century until the early 20th century the United States took control of territories and lands west of their original country. They overtook vast territories arguing that it was what they were destined to do. Although Manifest Destiny may have begun out of a desire for more land, it became an extremely racist concept. Manifest Destiny allowed white Americans to argue that they were superior to all those who they conquered and that by taking their land from them, they were racially superior.

Manifest Destiny began with the white settlement of indigenous lands west of the Mississippi River. In 1803 the United States purchased the Louisiana Territory from France, which added a significant amount of area to the United States. However, the territory truly belonged to the indigenous people who had lived there for generations. In 1830 Andrew Jackson signed the Indian Removal Act which allowed white people to remove indigenous people from their land and force them west. The disregard for ancestral homes and cultures was integral to the concept of Manifest Destiny. Indigenous tribes were forced onto reservations where there was a complete disregard for social interactions. Many tribes and groups that held animosity towards one-another were forced to live close together. Some indigenous people were also forced to assimilate with the white Americans. Boarding schools were established with the intent to “civilize” native children. The schools and many white Americans believed that indigenous people were uncivilized savages who needed to be tamed. Many also believed that because they were not Christian that they were barbaric. The schools taught children to speak English and worship the Christian god. They removed the children from their cultures and forced them into assimilation. By the 1880s, 60 residential boarding schools had been established in order to convert indigenous children to white Euro-American society. Throughout the United States’ expansion from the Atlantic to the Pacific Ocean they destroyed Native American cultures with no consideration of the cruelty and racism they were enacting.

The United States expanded until they reached the west coast of the present day United States, however, they still held firm in their belief of Manifest Destiny. They believed that they had the divine right to conquer any land and people. In 1898 the United States annexed the Hawaiian islands after the termination of the Spanish-American War. The United States overthrew the monarchy that Hawaii had maintained and controlled the islands as a territory for decades before making it a state in 1959. The Hawaiian people are ethnically related to those from the South Pacific and therefore the annexation of Hawaii was racist. The United States desired the ports available in Hawaii and without consideration for their culture and government, took control.

The United States also obtained the Philippines from the Spanish in 1898. They believed the people of the Philippines to be savage and wild. They controlled the islands for nearly half a century and it extended their manifestation of destiny to Asia. Their racist mindset against Filipinos was integral to the American concept of Manifest Destiny.

The United States’ racist mindset contributed to the concept of Manifest Destiny. Expanding their territory across the continent and even the ocean at the expense of certain indigenous and non-white people demonstrated how the United States believed that they were divinely ordained by god to be better than other races and control them.