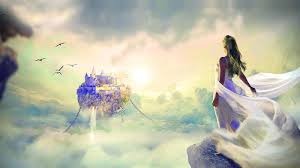 The tweens and teens of TikTok think they’ve found a way to transport themselves into different realities. They have two main methods of achieving this. The “raven method” which consists of laying on the floor with your limbs spread out Vitruvian Man style while counting down from 100 while thinking of their desired alternate reality. The other one, named the “Alice in Wonderland” method, requires you envision yourself chasing after someone from the reality you wish to shift to running away and you jump down a rabbit hole after them. At the time I’m writing this, the hashtag “realityshifting” on TikTok has 300.8 million views.

The places these people are ‘shifting’ to are fictional universes like that of Harry Potter or Attack on Titan. An InTheKnow claims that there is no need to worry about the kids doing this because “none of the participants want to stay in their shifted reality for forever.” I would like to talk about why that’s wrong.

I’m sure there’s a lot of people participating in this trend because they think it’s a fun way to dream. They know it’s fake, but you have to understand that there are people who legitimately think they’re spiritually shifting into a fictional universe. You can go onto these TikToks, look at the comments, and find kids saying things like “You don’t ‘make’ your own reality, your simply placed into one that already exists” and “When you script someone to love you, you aren’t forcing them to love you, it’ll just shift you to a reality where they already do”. There was one video where a girl said she shifted to Hogwarts and killed Draco Malfoy. People in the comments were sending death threats and calling her a murderer because they believed that Draco Malfoy was a real person in this alternate reality. It’s not healthy.

What they’re actually doing when they ‘shift’ is something called lucid dreaming. If you’re not familiar with lucid dreaming, it’s when you can control what you’re dreaming about through either guided meditation beforehand or by being aware that you are asleep while you are dreaming. It’s a recognized phenomenon in the medical field. The InTheKnow article also says that this is not true because “the shifter is awake and conscious during the whole experience” while a few paragraphs earlier they said “It just feels like waking up from a very good dream.” It’s not a good article, however it’s the only one covering this that’s not blocked on the school computer and I can use it as an example to pick apart.

It’s also been pointed out that a lot of people’s experiences sound very close to something called “maladaptive daydreaming”. This is a disorder where people daydream as a form of escapism to the point where they don’t have control of when they start daydreaming. It may not sound too serious to some people but it can seriously affect a person’s ability to function in everyday life. There’s also a risk of it leading to a problem with dissociation, and as someone who’s had to deal with dissociation in the past as a trauma response, it’s not something anyone should encourage. You never want to feel like you’re detached from your body and watching your life as an outside observer.

Towards the end of the InTheKnow article they have a quote from a TikToker who talked to Vice saying “This is an actual practice that people actually do who have done research on.” Lucid dreaming is a real practice used within various religions and spiritualities. The difference is that they know they’re lucid dreaming. There is something else that I’ve seen passed around as ‘proof’ of reality shifting being a real thing.

A CIA document from the MKultra era (which, if you are unaware, was a time when the CIA did a series of unethical experiments on people in an attempt to learn mind control) released in 2003. It’s called “Analysis and Assessment of Gateway Process”. It’s 29 pages of small print so I’m not sure how much of it the people passing it around have read but, for research sake, I have read all of it.

There is no actual data in the paper. It only talks about theories and whether or not they think there’s a possibility of them being true. There’s no way to mimic the experiments mentioned in the paper. Just because it used big words and fancy language doesn’t mean there’s actual proof. The CIA is not a scientific organization. It’s the Central Intelligence Agency, their main purpose is to collect information for the government and commit human rights violations. None of the experiments done for the MK Ultra program resulted in anything but a public distrust of the agency.

The biggest point I want to make is that we can’t keep treating these kinds of trends like they’re harmless. By doing that we are letting kids buy into unhealthy beliefs unrestrained. Of course many of the people doing this are going to grow up and laugh at how stupid they were when they were younger, but there’s also going to be people who don’t grow out of it. There’s going to be people who keep with these delusions for the rest of their life and that makes them vulnerable to things like cults and more dangerous forms of pseudoscience.