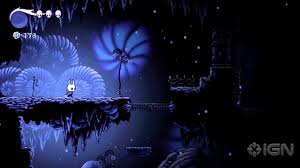 Do you want to throw 60 hours (assuming you are using guides) of your free time away? Do you have 15 dollars to spare? If you answered yes to any of those questions then you should buy HollowKnight. That’s right I am reviewing a 3 year old game that you probably never heard of. Joking aside I think this game does not get enough attention. If you are a fan of huge metroidvania games where you unlock abilities in order to move across an enormous map, then this game is perfect for you.

This game excels in many areas of gameplay, the most important of these areas is the map. The entire game is set underground, but that doesn’t stop it from having a huge map. Now with this map there is the issue of not always being able to know what you need to do next, unlike most metroidvania games you don’t have a set objective….ever. This is in contrast to other games like the original metroid games or Ori and the blind forest, but surprisingly this makes the game more fun. Instead of being herded into the new area by an obscure door hidden in a wall, you are able to go into the next area with an ability you get from a boss, or maybe it’s just laying around in a random corner. You could be on your way to another area but find out you need a new ability, and then you go to get that ability, and you find another area that you can explore. Then the cycle repeats, again and again and again. Now you won’t be completely clueless you can still piece together the basic story just from a casual play through.

But if you like complicated stories that also take up more of your time to piece together, the game has that too. It’s a little more difficult to piece together, however you could just watch a youtube video on it because who really has the time to examine every inch of this game.

We already know now that the map is amazing, but the bosses are also nothing to ignore. Every single boss in this game is unique to itself. There is even a boss rush mode in the late game where you can attempt to take all the bosses on one after another, and by that I Mean you will be hitting your head against the wall in pain because you’ve been playing for 5 hours and haven’t beaten the boss rush mode yet. Speaking of enemies, another thing this game does differently is that every new area has a new unique enemy with its own attack pattern.

However this game has some flaws, for newer players the game can seem difficult, but I promise you if you stick to the game it gets easier. But with all the major points of the game out of the way it is time for the final score review of the game, you may have already noticed that I like this game already so my bias is put into the ending score. I declare this game a 9.5/10 with its only major flaw being the difficulty for beginners.