How well do you know Ms. Britt? 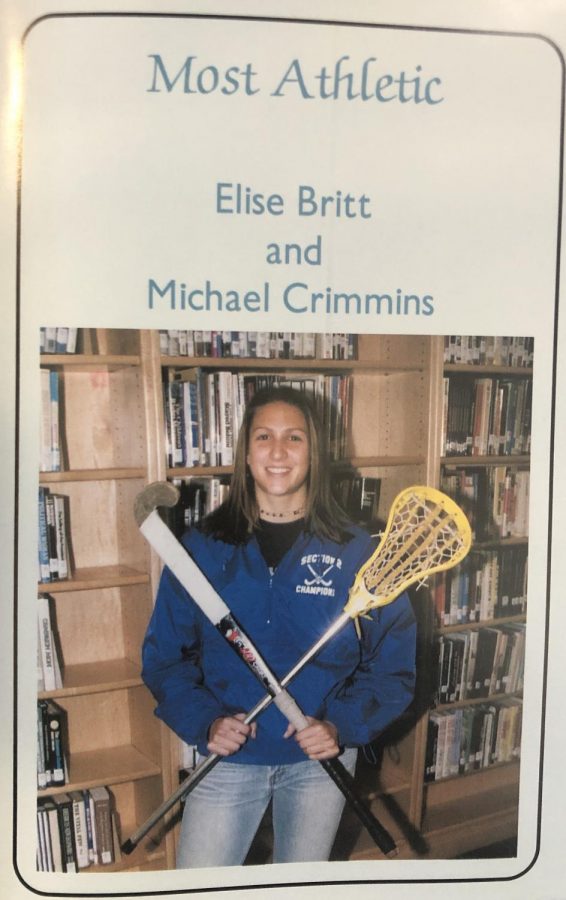 Ms. Britt is 33 years old and currently lives in Saratoga. She started her college education at Clarkson University. After attending for a semester, she decided she wanted to change her major. Ms. Britt decided to study physiology at Skidmore College. Her favorite college sports were field hockey and lacrosse. She much preferred field hockey to lacrosse because of all of the great friends she made on the team. She had a few embarrassing moments during high school and college. Her embarrassing moment in high school was when she did a dance off with a student and while doing so, she did a split and her pants split right down the middle! Her embarrassing moment in college was when she attended a voice class and she had to perform a solo in front of 150 people and parents!

Her 10th grade social studies teacher, Mr. Miller, had an important influence on her. Mr. Miller was also her high school Student Council advisor. Senior year she was the vice president of Student Council and she got to spend a ton of time with Mr. Miller then too. When she panicked during her first semester of college, she was back in Miller’s classroom crying because she didn’t know what to do with her life. She admits she was a very dramatic teenager! That breakdown was a turning point for her. Mr. Miller told Ms. Britt that one thing he knows makes her happy is exercising, sports, health, and fitness and that she needed to continue to keep herself busy in that field somehow. He recommended teaching then, but Ms. Britt wasn’t sold on it. Her mom was a kindergarten teacher, and she saw how hard she worked, and how many hours she put in, and how thankless it could be at times, so she really wanted to stay out of education. She did follow her passion in exercise and transferred to Skidmore to study exercise physiology. She always kept in touch with Miller because he was such a positive influence. She would see him at Humpty Dumpty’s quite often (the two of them think they may be responsible for helping to keep the place open), and he kept encouraging education. Ms. Britt started coaching lacrosse, loved it, and got her Masters in health ed. Then she got to work with him while at Saratoga, and as fate would have it, she ran into him at Humpty Dumpty’s again last May and he mentioned this job opening. And the rest is history. She always knew she could trust him and open up to him. He truly wants what is best for everyone around him, and he will work his butt off to keep everyone happy. That’s the kind of boss she wanted to have and thinks that’s why she always came back to him for mentoring.

One of Ms. Britt’s unique character traits is that she is curious and asks lots of questions and likes to explore. If she could create any dance move, it would be called the Galway Groove. That dance consists of flips, splits, handstands, and the worm. Her spirit animal would be a tiger and/or cat. Her dream house would be a rustic log cabin with a bright, beautiful view of a sunset. Ms. Britt’s dream car would be a Mercedes G wagon. Her favorite ice cream is the chocolate/vanilla twist with rainbow sprinkles at Humpty Dumpty’s in Saratoga. She is usually their very first customer, both this year and previous years. Her favorite all time color is navy/ royal blue. She loves the superhero Wolverine because of the transformation between the man getting his claws, along with the hair. She has traveled to Italy, Holland, Switzerland, Thailand, Australia, Vietnam, Beijing, and many more places. She has been hiking the High Peaks recently. She has hiked Algonquin, Cascade, Lower Wolf Jaw, Upper Wolf Jaw, and more.