Volleyball During the Off Season 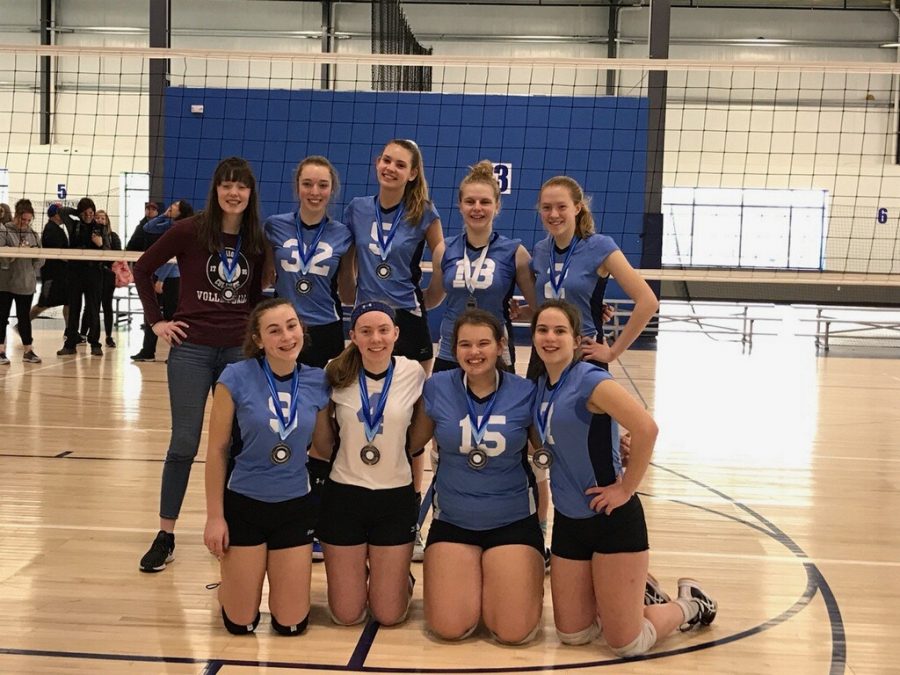 Sadie and the Lakeside volleyball team

Making it to States is not as easy as it may seem. It takes lots of difficult, harsh, and tear-filled practices throughout the year. Our team goes through it all, from practicing on the sand court in the hot summer heat, to going to practices and tournaments every Sunday in the frigid winter. And yes, in our spandex. We use the off-season as a way to stay in shape, improve our skills, and prepare for the next year’s season, no matter which club we join.

In the winter and spring months, most of us join club volleyball. Some of us join Lakeside, which is the Burnt Hills Club, or the Sacandaga team, or The Jaguars of Guilderland, or just the Galway WSVBC (Western Saratoga Volleyball Club) team. Some of these clubs start for girls who are only in third grade. However, the Galway club starts for sixth graders.

My first year of club was when I was in eighth grade, which really introduced me to the sport and got me interested in playing in high school. I still remember being tracked down by many of the varsity players, due to my height. Some followed me into the bathroom or came up to me in the library, persuading me to join even though I knew nothing about volleyball. That year I joined and played for our Galway club team, which is not very good compared to the others since many of our best players go to other clubs. However, we use it as a way to improve our skills. I was told that since I was the tallest on the team, I was going to play middle, the position that little did I know would become mine for the majority of high school.

I enjoyed playing on the team, being with all my friends, camping out with all of them at tournaments, and I loved my position. Club really prepared me for my first year ever playing during the Fall season on JV. This was my freshman year and since I did very well, the varsity coach, Coach Glenn, asked me to play club for Burnt Hills’ Lakeside team since they were more skilled, had more practices and tournaments, and he wanted to prepare me to play on varsity my sophomore year. My team did very well and we won many tournaments, which I was not used to. On the down side, even though I was the tallest, I was asked to play right side in order to block the outside hitter, or strongest hitter. At first I hated it, but towards the end I started to enjoy playing right side, which I later played my sophomore year. In addition, this was a travel team which is a lot different than the local team I was playing on for Galway. We went to tournaments in Hartford, Pittsburgh, Boston, and Rochester, along with the local tournaments and had practice Thursdays and Sundays. Though all this playing time made me a better player by teaching me a new position and put me on varsity my sophomore year, it took a lot of time and effort since we had to drive for hours on Fridays and stay at a hotel all weekend. Therefore, I switched back to the Galway WSVBC club this year. Playing with my team allows me to see their patterns and adapt to how they will play in the fall season, instead of like last year when I came back to Galway and had to learn an entirely new rotation and get used to my new team.

Our team also prepares for the fall season in the summer by playing on the Sacandaga Volleyball Club. We have tournaments every Wednesday, stretching from the end of June to the beginning of August. We also have practices on the school’s sand court in the evening and in the gym early in the morning, due to the brutal heat. This includes conditioning at Crossfit and several summer camps as well. During these conditioning sessions, we do workouts to help with agility, such as box jumps, endurance by running mountains and doing ladders, and building our core and leg muscles through planks and wall sits. This is definitely the worst part of volleyball, sometimes so rough I get sick, but in the end it’s worth it. Summer camps serve a major role in our team’s overall success, as well. We have been coached by several amazing players, such as the outside hitter for Syracuse University and the middle for Penn State University.

Many of us also attend the summer camp at Castleton University in Vermont. This is a three day overnight camp in which we sleep in the dorms and are put into groups with a variety of different players and positions. We learn a ton of new skills such as a float serve and as weird as it may sound, how to roll back onto your feet after receiving a ball. However, these camps come with a price, the price of pain. We are left with extreme leg and back pain. I remember at one of the camps last summer we had to hold the ready position, which consists of having your knees bent into a squat and arms straight out, for two minutes with only thirty second breaks between the three reps. I remember watching everyone’s, including mine, knees begin to shake and give out but if they did, they would restart the clock and begin the torture all over again. It was so painful that whenever the coach would say “ready position,” the whole team would whimper. The next few days I could barely walk and had to stock up on Advil.

Lastly, we are asked to work on our skills and build our muscles in our own time through the weight room at school, gym, or for me since I go to Florida a lot, on the beach. Every vacation, I go to the beach volleyball courts and play in the sand. I really enjoy playing beach volleyball and sometimes even play with other players I meet on the beach. In addition, I occasionally schedule to do workouts in the school’s weight room after school with a few of my fellow teammates. When I’m not in the weight room, I do a workout at home in my living room which consists of planks, squats, and stretches that help with flexibility.

Though volleyball is the only sport I currently play, I put my blood, sweat, and tears into it all year round. What feels like endless drills, conditioning, clubs, and practice really pays off in the end. As a team, our goal is to make it back to States and win the gold, no matter how difficult the journey is!