Top twelve MCU characters we want back: Pt.2 of 3 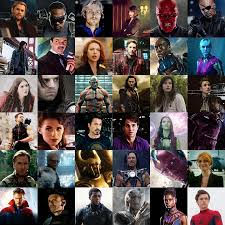 If you have not seen Avengers Infinity War or any other marvel movies I suggest you not read this article. Huge SPOILER ALERT. Infinity War was awful for one reason. Half of all The Avengers ( and all living creatures ) died. So I will be doing this to see which characters are missed the most. In the last article the last four choices ( 9-12 ). Now we’ll find out who was picked for 8-5.

8. Gamora – Gamora is the adopted daughter of Thanos. In Infinity War we got to see her origin. She was taken from her mother when Thanos invaded her planet. Half her planet was killed. She was with Thanos for most of her life. That is until the first guardians of the galaxy came out. She has grown a connection with Star-Lord. So when we saw what Thanos did. we were upset. Her death came before the snap but her death led to Thanos getting the soul stone helping cause the snap.

7. Nick Fury – Not much is known about his past if you haven’t seen Captain Marvel. What we do know without watching it is that he was an agent for S.H.I.E.L.D . That is before we found out S.H.I.E.L.D was actually a branch of Hydra. However not everyone there was not Hydra. Nick Fury lost his eye and that is probably shown in Captain Marvel. He was also the one that started the Avengers Initiative. The Avengers Initiative was and I quote “An idea to bring together a group of remarkable people so when we needed them they could fight the battles that we never could.”

6. Star-Lord – After Infinity War he is definitely low on my list of favorites. Yes I know he was just doing what most people would have done in this situation but still. He is partially responsible for half of the universe being snapped from existence.  He does have his good moments though. He brings a comical relief to the movie.

5. Black Panther – Another new-comer to the MCU, we were disappointed to see him be killed off so soon. However odds are he’ll be back. Black Panther had amazing reviews and many people went to go see it. Pretty sure Marvel won’t drop a new character this soon after his arrival.

And with that I will leave you to wonder who are in the top 4 spots for the top MCU characters we want back from the snap.