and you should, too! 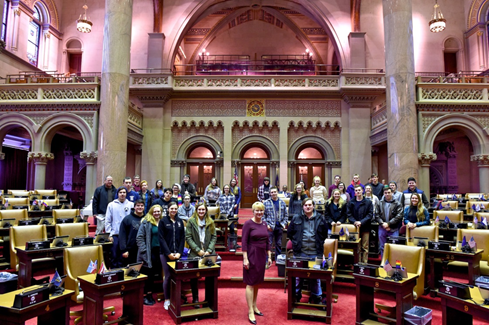 Early Tuesday morning, a bus packed with seniors made its way to New York’s Capitol. The roads were slippery with snow, but we finally found ourselves in a city of ornately carved castles and cozy brick apartments: Albany. Oohs and aahs cascaded through the bus as we gazed out the windows. These sights were nothing, though, in comparison to the splendor we saw in the Capitol building.

The tour began on the somber Senate Staircase, made of intricately carved, gray stone. As we climbed the steps, we became more aware of the importance of the place we occupied. More than a century of landmark decisions and events had happened here. What famous figures had walked on this very stairwell? What conversations had taken place on this very landing?

Our tour guide, a young woman with a slight accent, led us through a maze of beautiful hallways, spouting facts along the way. “These gates incorporate the design of a Revolutionary War musket,” she said, pointing to an intimidating pair of wrought iron gates in front of us.  Later, “There are secret elevators in the Capitol, built to help FDR move more easily with his polio. I only know where one of them is…”

Soon, we found ourselves in the largest room in the Capitol, the Assembly Chamber. It’s impossible to take in everything at once: the red carpet, the curved rows of seats, the beautiful sandstone ceiling, the magnitude of it all.

Our assemblywoman, Mary Beth Walsh, invited us to take a seat. Climbing into one of those massive, cushy seats was one of the best parts of the tour. From there, we got an insider’s view of the Assembly Chamber. Many of the desks had miniature flag stands, each flying a unique combo of flags. Mine had an American flag and a Thin Blue Line Flag, while desks around me flew pride flags or flags from other countries to represent heritage.

Ms. Walsh spoke to us for the next half hour, arguably the best part of the trip. “I want to show you what a day in the Capitol looks like for me,” she said. I loved that she presented her job honestly. Being an assemblywoman isn’t all glamour and smooth sailing, she told us. “To get into the Assembly Chamber for a session, I have to make my way through the crowd of lobbyists outside. Sometimes that can be pretty scary.” As one of the only 43 Republicans in the Assembly, Ms. Walsh is also in the minority. “Today, the Assembly is voting on the Reproductive Health Act. I disagree with some parts of this bill, but I’m almost certain it’ll pass.” However, she recognizes her value as a minority party member. “It’s my job to point out weaknesses in bills, maybe costs that have gone unnoticed. Even if a bill ends up passing, I may have swayed a few people’s votes.” Although I don’t share the same political views as Ms. Walsh, I admired her determination and sensibility. Opposing views — and not just in politics — are necessary because they point out faults in ideas and help better them. It may sound trite, but thank goodness we aren’t all alike. Ms. Walsh also discussed other political issues, such as the legalization of marijuana. “What do you guys think of this?” We discussed some of the benefits and drawbacks together. Recreational marijuana can yield a huge amount of profit, for example, but the effects of addiction on families is something to be concerned about. Finally, she encouraged us to call and arrange to shadow her for a day. Her favorite part of the job, after all, is interacting with constituents.

Inspired by Walsh’s speech, we made our way to the Senate Chamber with our tour guide. It was much different than the Assembly Chamber, its carpets plusher and its atmosphere more sullen and formal. The room is divided in two, with the majority on one side and the minority on the other. “One funny thing about the Senate is the chairs. Every Senator gets their own chair, with their name and starting date on the back, and it goes home with them when they retire,” our guide told us. Every chair, therefore, is a different color. The bright red chairs are newer and belong to younger members, while the faded chairs connote ancient, wizened Senators. Two grand, unused fireplaces are built into the back wall, which is covered in shimmering 23 karat gold leaf. Because of the Senate’s perfect acoustics, sound travels unusually well — even the tiniest whisper. When Senators need to have a private conversation, they’ll meet in these “whispering fireplaces” to chat.

Next, our guide instructed us to look up at the carved stone arches and windowsills. “You’ll notice that some of the stone isn’t carved like the rest,” and she was right. Some areas were carved beautifully, with swirling, floral designs. Others had the faintest cuts on them, and some were completely bare. “The Capitol took 32 years to build, and cost about $25 million dollars. People were getting tired of paying for a castle. When Theodore Roosevelt took office in 1899, he immediately made a stop-work order. At noon, all of the workers put down their tools and just walked out, relieved to finally be done.” After that, it was impossible to stop looking at the bare patches of stone. Who had been working on that spot right above me before being told to go home?

The Capitol building is full of idiosyncrasies like this. As we made our way to the Hall of Governors, our guide told us about the ornate, coral-covered staircase we were walking on. “This is the Great Western Staircase, informally known as the Million Dollar Staircase. It took 14 years to build and cost over a million dollars.” Famous faces — Lincoln, Grant, and Susan B. Anthony, to name a few — are carved into the sides, along with relatives and friends of the stone-cutters.

After walking through the Hall of Governors, a narrow hallway decorated with the portraits of past governors, we walked into the War Room. Its domed ceiling glows with paintings of cities, landscapes, and people from around New York, paying homage to the beauty and history of our state.

The tour drew to a close as we made our way down the stairs and into the lobby, passing sign-carrying lobbyists already starting to gather in the halls. However, our guide had one last thing to show us: the Devil. Tucked beneath a scroll-like carving on the wall of a dark hallway is, in fact, a miniature carving of the Devil’s face. It’s smaller than a penny, and requires a flashlight to see, but there’s no mistaking its devilish scowl. Legend has it that if you spot it without the help of a guide, you’re a devil yourself.

The next time you find yourself with some time on your hands, schedule a tour of the Capitol. Better yet, arrange to shadow Mary Beth Walsh for a day! It’s impossible to describe the beauty of the building, and the feeling you get as you enter the Assembly or Senate Chamber. Finally, big shout-out to Riley Flint and Mr. Maliszewski for making this field trip happen!