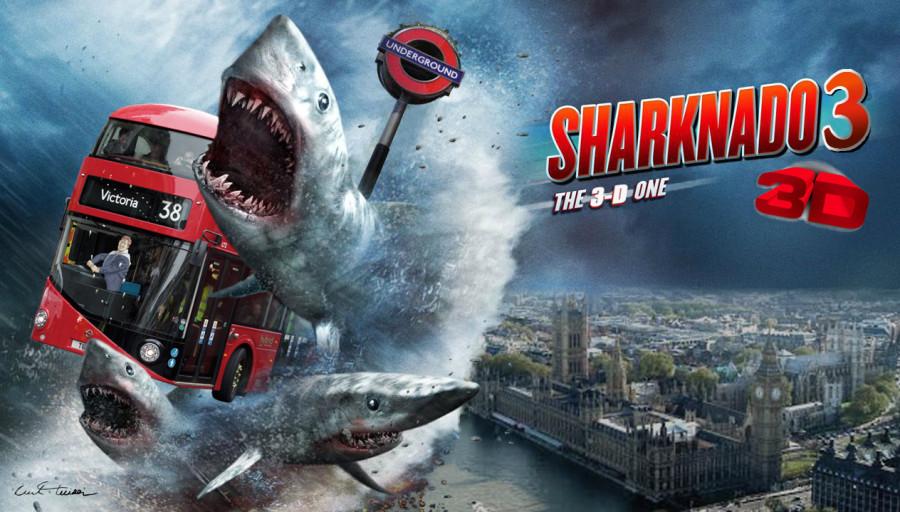 Sharknado 3 is about a sharknado. “What does that mean?” the two of you who don’t know about it might ask. Well, the premise is simple, there is a tornado of sharks. It’s every bit as ridiculous as it sounds. The movie opens up with the main character, Finn, receiving an award for dealing with the first two sharknadoes. While he is in D.C. for the ceremony another sharknado hits. Scientists predict that even more sharknadoes may hit the entire East Coast.

While this is going on, Finn’s pregnant wife and daughter visit Universal Studios, who I am almost positive funded this trainwreck. That globe that sits outside of the park that looks like their logo plays an integral role in the climax of the movie. The plot after that point is pretty flimsy, except or the ending which I dare not spoil for you here. Let me just say that it results in what is quite possibly the most ridiculous thing I have ever seen. And I’ve seen a movie where birds attack people and explode because of global warming.

The acting is terrible. Nobody seems to know what emotion is. I’m pretty sure the cast is actually all secretly robots that are trying to remove all emotion. The best actor in the movie is George R. R. Martin and he was on screen all of two seconds before being eaten by sharks.

The movie is filled with some of the most ridiculous imagery that any movie has ever had. There’s sharks in water slides, sharks sitting in Abe Lincoln’s lap, sharks on a roller coaster, and David Hasselhoff’s face. I’m not a big fan of David Hasselhoff when he’s not driving talking cars and this movie did nothing to convince me he deserves to be acting at all.

If you like bad movies though, I’d highly recommend grabbing some friends and giving it a watch. As a movie it is 1/10 but as an experience it is most definitely 10/10.

Have you seen this or any of the Sharknado movies? Leave a comment and tell us what you think!